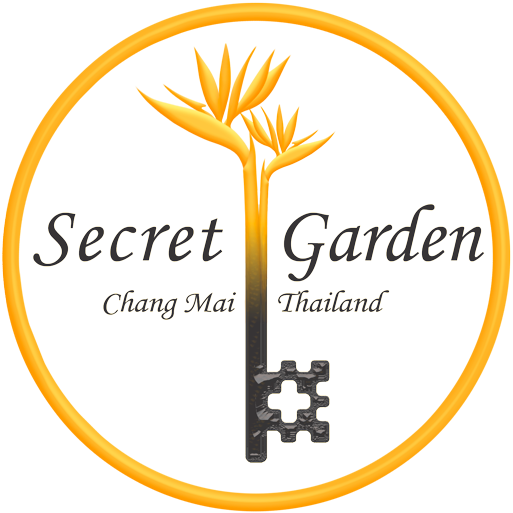 The Secret Garden Resort is a cozy, romantic, family run bungalow resort at the fringe of Bo Sang Village, one of Chiang Mai’s Handicraft Centres, well known for it’s brightly painted umbrellas. We are located in a small rural village, allowing you to experience and immerse yourselves in a new culture. Tucked away from the hustle and bustle of the city, you are guaranteed a peaceful stay amidst nature, while still keeping you in close proximity to Chiang Mai’s city centre, which is only a 20-minute ride away. Therefore giving you the possibility to go explore what the city has to offer.

The name of our resort, Secret Garden, was inspired by Frances Hodgson Burnett’s novel and that is exactly what it has become over the years – – an enclosed tropical garden with ponds, where you’ll find all sorts of plants and birds .Nestled in between it all are small, almost-hidden bungalows that allow a retreat, while still keeping you in close contact with your hosts and fellow guests. It gives you the chance to spend a few days relaxing and focusing on yourself.

After working in Mexico in the 70s and 80s, Peter came to Thailand and started continuing doing Handicrafts in 1983. He built his first house in the rice fields in 1985. Soon after, he met his wife, Pai, and they married in 1989. They started a family, bringing their daughter, Isabel, into the world. In the 2000s, the demand for real handicraft diminished rapidly, which lead to the closure of their workshops and factory. The idea of building a resort was always on the back of their minds. In 2005 the first steps of the Secret Garden resort began; transforming their workshops into bungalows. The doors opened in 2007, and since then they have been welcoming guests from all over the world.

Our Secret Garden is located in a small Thai village called, “San Ton Haen”, just 2.5 Km away from the famous Umbrella Centre, Bo Sang. San Ton Haen, is one of the last places in the area that still produce the bamboo frames used to manufacture the umbrellas. The frames are difficult to make and an art form in itself. A lot of the villagers are still rice farmers, planting 2-3 times a year. There is a strong sense of community within the village- – very visible in the way everyone helps and interacts with each other.  Visitors are always welcomed with a friendly smile, so feel free to explore the surroundings and get to know a new culture.

Our lovely and loyal staff have been with us for many years, some over 20 years, going back when we were still producing handicrafts. The majority of our staff are family members,but everyone working with us is considered family in our eyes. Our staff have been with us from the very beginning, through the good times and all the tough ones as well. We believe that a positive and healthy work environment is key to the improvement,success, and growth of a business.